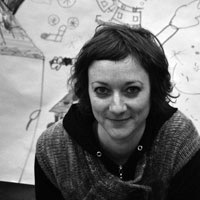 Daniela Stamatiadi is a graduate of  the Athens School of Fine Arts. She works in Athens, Greece as a painter, illustrator and visual arts teacher in private colleges. She has been a freelance children's books illustrator since 2000, producing more that a hundred books.She is a recipient of the The International Board on Books for Young People (IBBY) award (2010) and the Greek Graphics and Illustration (EVGE) award (2012). She was also invited to represent Greece at the Salon Du Livre 2012 in Paris. Daniela has taken part in numerous painting and illustration exhibitions both in Greece and abroad. Since 2010 she has been cooperating with the Frissiras Gallery and the Frissiras Museum. In 2013 she received two EVGE awards and an Andersen Award nomination.

For Potamos Publishers she has illustrated the following books: The Most Beautiful Thing in the World by Anna Damianidi, The Promise by Anna Conomos, and Little Manou and the Moon by Kyriakos Charitos.